Summery Tilda and a few challenges 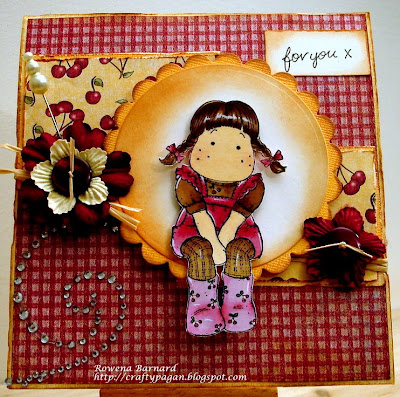 Good morning everyone! Hope everyone is having a good week so far. I've gone all summery today and used this cutie Tilda and some gorgeous cherry papers to match her. The theme over at Simon Says Challenge this week is summer fruits or summer colours and since I still live in hope of winning a $25 shopping spree at their store I had to play along again! I've also followed the sketch at Pollycraft monday which has just opened their challenge blog to include any images *doesn't have any sweet pollycraft stamps to play with yet*, their theme is also food and drink and since this Tilda has cherries on her boots and I have some on the papers I think that qualifies! Over at our Creative Corner their challenge this week is called 'triple play' and they give you a list of embellies to pick 3 from-I've chose buttons, ribbon (raffia) and bling. Also...Just Magnolia want us to use buttons. Phew!
Stuff: Magnolia Tilda coloured with promarkers, hotp papers, core'dinations card, raffia and buttons from stash, prima flowers, sentiment from part of a forever friends stamp, prima bling, distress inks.
Leo's little backpack arrived yesterday and he spent a lot of the day carrying it round and putting stuff in it and zipping it up-so sweet! I'll pop a proper pic up of him later when I've uploaded em as they're on me phone. I ordered a couple of Motivet stamps the other night-they're so adorable I just had to have some so hopefully they'll arrive soon! Thanks so much for stopping by and any comments you might leave me-they make my day! Huggles xxx
Posted by craftypagan at 10:01 am