Morning guys! I had hoped to post this last night but I just didn't get round to it-was so aiming for a post a day this week! Ah well! Since everyone seemed to really like my Alice in Wonderland Tag Sets I decided to have a play and make some little place cards-and well its just plain fun to make something different for a change! 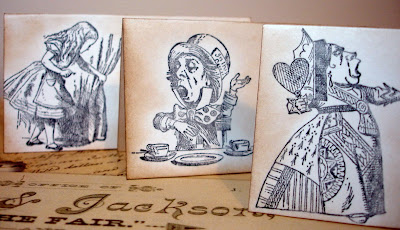 I made a set of six, 2 of the mad Hatter, 2 of Alice and 2 of the Red Queen. These are available to buy here incase anyones interested;) By the way obviously people are having little Alice in Wonderland themed parties-if you're having one can you invite me please! Wouldn't it be fun! I think these will work for the Simon Says Challenge which is going to the movies-my movie being Alice in Wonderland and Sir Stampalot Challenge where the theme is fantasy. 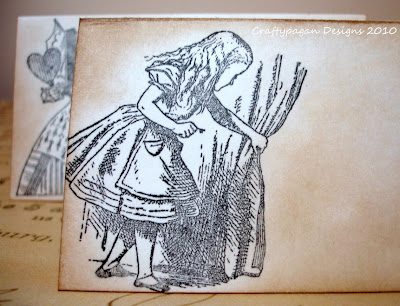 Here's a card I made too-I don't think I've ever really made a card that I haven't coloured-at least not with a stamp-hmmm well not for ages and ages anyways! So quick to make-stamp-ink-stitch-done as Gordan would say! 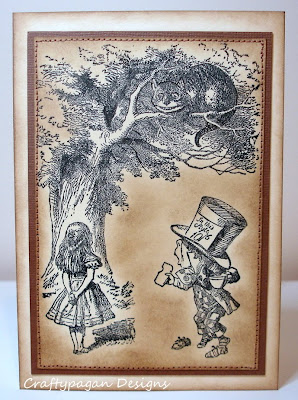 Me and Leo have been up very early this morning but mr postie was very early too and he had a nice parcel for me with some goodies to alter, a new distress ink, some new paints, bits and bobs so hoping to have a play tonight when Leo's tucked up in bed:) Hope you have a wonderful weekend-the sun is shining here right now so lets hope it stays that way:)
P.S. Anyone is un the UK watching 'over the rainbow' on Saturday nights? I love it!
Posted by Unknown at 9:00 am