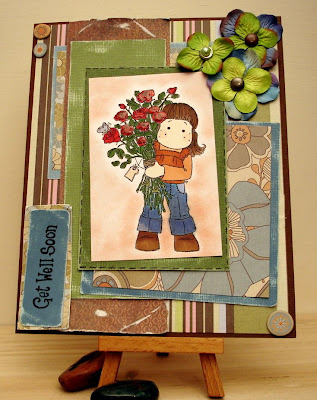 I keep leaving the Just Magnolia challenge too late as I always think I have loads of time to do it then the week whizzes by, so I've got in early! A few weeks ago I mentioned that the village shop started stocking my cards, well 80% of the stock I gave them has been sold so I dropped some more off yesterday but she wants a few get well cards and I think this cutey Tilda is just right. Went with an earthy palette of colours, I don't often use green so it was a bit different but I love the combination now it's finished.  Not sure if you can see in the pic very well but some of the roses are a bit shiny as I popped some glossy accents on-love that stuff! Ooo nearly forgot to say that I've ordered the summer Magnolia stamp club now-hope it won't be long till they're released!
Materials: Magnolia Tilda Spring release, core'dinations cardstock, Cloud9 papers and chipboard stickers (flowers), papermania brads, ccsr sentiment, glossy accents, prima flowers
Thanks for stopping by-really appreciate it! Hope everyone's had a fab weekend!
Posted by craftypagan at 9:00 pm