Evening everyone! Hows your weekend going? Mine's been good so far, apart from yesterday when me and my friend Michelle took to the kids out for the day and things all got a bit dramatic! In the afternoon Leo suddenly out of nowhere started walking oddly on his right leg like then he wouldn't walk at all-not like him-he'd much rather run around than be carried! After a little bit when it still hadn't improved I took to him to A and E, they examined him and everything and his temp was up as well. So...the consultant decided we needed to go to a bigger hospital as he thought there might be fluid on his hip and a temperature is a symptom of it so off we went-was really worried by this point! When we got to the next hospital and after more examinations and more doctors it was decided it wasn't a hip problem, and actually he was ok-just a bit of a bug and by this point he was walking ok after being given medicine and off we went home! He's pretty much fine now, thank goodness and no walking problems so who knows what the leg thing was about! Its such a guessing game when they can't communicate enough to tell you what the matter is! 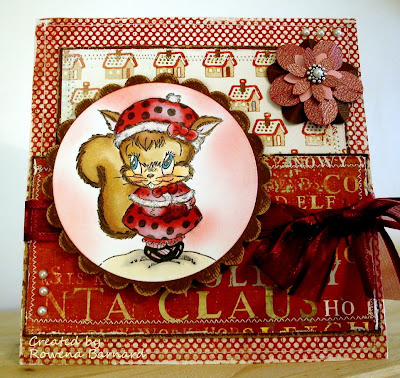 Anyways...I have a card to show ya! I got this cutie stamp about a month ago but was waiting for some lovely christmas papers and now I've got some newies decided it was time to ink her up! Also time to start cracking on with the chrismas/yule cards! There seems to be a few challenges this week who are encouraging us to do just that so this card works for Simon Says Challengewho want to see christmas creations, winter wonderland who want to see home featured in christmassy creations (there's sweet little houses on the paper I've used), Dutch Dare also want to see Christmas Creations as do Creative Card Crew. The layout of this card is courtesy of the fabulous Kellie's sketch challenge-you should defo pop over there as you could win 3 adorable motivet stamps!
Stuff: Motivet stamp 'doraline bundled up', mme papers 'merry days of christmas', pearls and bead cap from the Elaine at Quixotic Paperie, ribbon from stash, sewing machine, mcgill and x cut punch, core'dinations card
Ooo almost forgot to ask you guys-I need to make an engagement card for my step brother and his now fiancee-any image ideas? Thanks so much for stopping by and any comments you might leave me-they make my day! Enjoy the rest of your evening! Huggles xxx
Posted by craftypagan at 7:26 pm